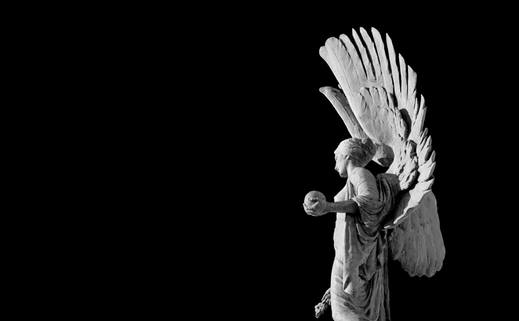 From the Pearl of Great Price, we learn of the war in heaven. This war was not a battle of weapons and bloodshed, but of eternal progress. It was a battle of testimony in order to attempt to save every soul in the family of our God. Though that battle began in the pre-earth life, only the venue has changed. We continue to fight today upon the face of the earth.

“The great war that rages on every side and which unfortunately is resulting in many casualties, some fatal, is no new thing. There was war even in heaven, when the forces of evil sought to destroy the agency of man, and when Lucifer sought to lead us away from the path of progression and advancement established by an all-wise Father.”1

We do not fight this war alone but are surrounded by heavenly helpers. I recently read an account from the book “Stories from the life of Joseph Smith”2 where the prophet, Oliver Cowdery and David Whitmer passed an aged man walking down the road with a knapsack slung over his shoulder. They asked him if he would like a ride, but he declined, saying he was heading over to Cumorah. This confused Oliver, never having heard anything about an area called Cumorah in the county. After they passed, they looked back, and the man was gone. The prophet informed them that it was a Nephite to whom he had entrusted the golden plates for safe keeping until the next day. I know that angels assisted in keeping Joseph and the records safe during his sacred work.

Angels play important roles still today in the battle that rages on. We may or may not know them for who they are, but they are real and active in our lives. I love the account in 2 Kings when Elisha the prophet was surrounded by the Syrian army. They were out for his blood. His companion was worried about the numbers of soldiers they presented, but in a beautiful answer to the man’s fears, the prophet prayed for his eyes to be opened. Verses 16 and 17 read, “And he answered, Fear not: for they that be with us are more than they that be with them.  And Elisha prayed, and said, Lord, I pray thee, open his eyes, that he may see. And the Lord opened the eyes of the young man; and he saw: and, behold, the mountain was full of horses and chariots of fire round about Elisha.”

The very angels of heaven stood at the ready to fight the battle. I wonder how many times in my life as I struggled, I was surrounded by angels who fought on my behalf? I can think of at least three times where angels were present to protect me, one of which occurred as I served a mission in Florida. My companion and I were walking down a dirt road. Everything was in slow motion as I watched her lowering her foot upon a baby rattlesnake which neither of us had seen until that very moment. Just when I thought she would be bitten by this tiny viper, we were suddenly past it and the snake was making its way across the road as we moved forward. I don’t know how it happened, but I do know that an angel fought our battle at that moment.

The Father still sends His angelic soldiers on errands to protect and guide His faithful servants here on the earth. I hope that we can be more aware of their imprints and recognize their presence in our lives.