The priesthood helped me during cadet school.

I was only 2 weeks old in the program at that time, but already the intense mental and physical strain was reaching its breaking point inside me.

My most memorable priesthood experience

My most memorable time where the priesthood helped me during my time in the military was actually during my time in Basic Cadet Training at the United States Air Force Academy.  I was only 2 weeks old in the program at that time, but already the intense mental and physical strain was reaching its breaking point inside me.

We had accomplished dozens of hours of marching, yelling quotes, having upperclassmen scream in our ears, eating at attention and being physically trained to the point we could not move.  I, myself, had become the focal point of the upperclassmen’s attention several times.

For clarification, when one is accepted to the United States Air Force Academy, you start out in the summer as a Basic Cadet for six weeks.  While there is actual Air Force Officer and Enlisted oversight, much of the training is accomplished by Second Class (Junior Level) and First Class (Senior Level) Cadets. Hence the term “upperclassmen.”  It was Sunday, and I had just finished one of the worst dinner experiences during my short time at Basic Training, and as I look back, since that time as well.

While I don’t remember clearly what precipitated the vitriol of the upperclassmen towards me, its results could not have been more impactful.  I was about as torn apart as I could get.  My resolve was spent.  As Basic Cadets, we had to run the academy’s terrazzo strips to go anywhere.  Tonight, despite it being quite the run from the chow hall to the chapel, I did not even remember doing it.  At the chapel Brother Hassel, our institute teacher, introduced us to some of the LDS upperclassmen.  A few of them were not part of Basic Cadet Training, but the majority were trainers just like those who had made my life hell tonight.  While I tried to listen to their testimonies and cajoling words, all I was seeing were people that would turn on me the moment we stepped out of the building and back into “trainer land.”

My dream was to graduate the Academy, so I was never in any mindset to quit despite the compounding hardships.  However, when the upperclassmen offered a blessing to anyone who wished, I put my hand up.  I had received many blessings in the past, some from my father and some from church leadership.  Each had been powerful in its own way.  However, tonight hit deep into the center of my soul.  I knew that the Lord wanted me here.

I knew that this was place, and all of its trials and downfalls, was part of his plan for me and I was to endure.  I had never felt an assertion near as strong.  There was warmth and an energy that had not been there before.  The rest of the time at the chapel was a blur.  However, when I stepped back outside, I realized I had the strength to get back out and run, the energy to accomplish the rest of that night’s training and the piece of mind to drown out the yells and focus on the tasks at hand.

Did Basic Cadet Training become easier?  No.  In fact, it only got harder from there.  However, I felt someone or something beside me during that time.  That was enough.  Someone was aware.  Someone loved me and someone was cheering for me.  That was all I needed.  A lot happened in the remaining time I was at the Academy.

Good and Bad.  However, this experience I have always called a turning point.  It has always stuck with me.  I know the power of the priesthood, I know what it can do for those in need.  I will never, and can never deny it, not after feeling just a glimpse of its true power.

Donate to our LDS soldiers

"Charity is something one becomes." 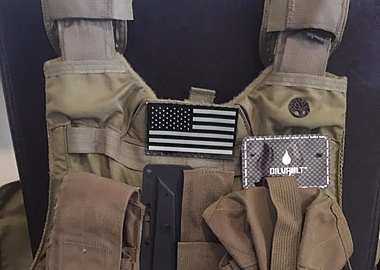 Donate Oil Vaults a soldier or troop and we will send the Oil Vaults on your behalf. Help soldiers have oil for priesthood blessing when in need.